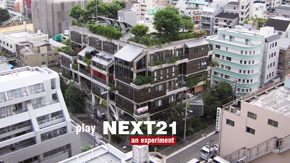 With the aim of creating an energy-efficient, green, social and flexible urban living environment fit for the challenges of the 21st century and its demands, Osaka Gas commissioned the experimental residential complex `NEXT21` in Osaka in 1989 (completed in 1993).

15 years into its existence and after three consecutive five-year cycles of ongoing inhabitation experimentation, this half-hour documentary `NEXT21 – an experiment` looks back on the context and conditions of its visionary and pioneering multi-disciplinary design process.

Interviews with the architects and engineers, inhabitants and Dutch architect John Habraken as commentator.