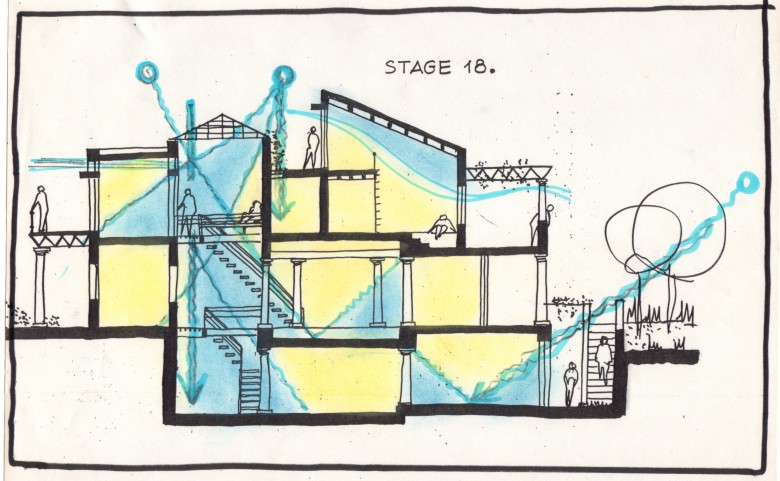 This DesignPlay was done before computers were used in design. It was done by Christina Gryboyianni, partner at De-Ar Architects, Athens, but at that time student at MIT.  The play is also shown in the book “Conversations with Form”  which I did with Andrés Mignucci and Jonathan Teicher,  where it is Play Three of  the seven plays featured in it. For the sake of clarity in lay-out Christina’s play was redrawn there, but in this site we have room for the coloured freehand drawings by which this play was submitted originally. This allows us to appreciate the rendered stages as a kind of thinking out loud while the designer moves on in her conversation with the form. We can read how she comsiders in a particular phase what options are available, what is still missing and why she decides on a next move.

One can have a meaningful discussion on the pro’s an con’s of freehand drawing, 2D drawing, and SketchUp modelling which is a matter I do not want to get into now. I suppose that a designer who is fully skilled in each mode of working will be capable to pass judgment on such a comparison and personally believe an architect should be equally familiar with each of them because different tools have different advantages in different cases. This site offers ready made base-forms in SKetchUp for the seven plays of the book to give you a flying start,  but submissions in other formats are equally welcome.

In all cases, you are encouraged to clarify your conversation with the form. In a design studio it is the final result that is exclusively important but in a play each move deserves full attention. A play, on the stage needs an audience and a play on paper or screen does so too. The more you can clarify your moves the better you can keep the attention of your audience. Fo that reason the Gryboyianni sequence of Play three is a stimulating example. She is thinking out loud while she draws and makes notes. It takes skill to  work that way and ways of working is what this site is all about.